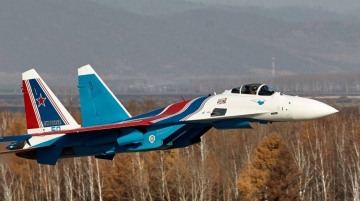 The Russian Knights aerobatic team will receive four new Su-35S multirole fighters. During air displays, the team fly six Su-30SM aircraft from the 2016, but they has eight aircraft from this modification.

It is not clear if the new aircraft completed the team configuration or they will replace the present Su-30SM.

The team already flew one Su-35 in 2003 from first generation, but only in solo display and in a few air displays.