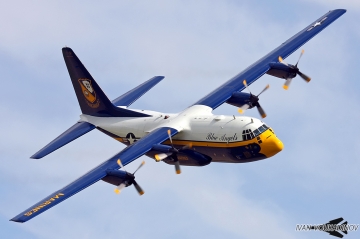 The current Fat Albert aircraft has been with the Blue Angels for 17 years and has flown more than 30,000 hours. The aircraft was responsible for carrying the team’s ground crew and equipment to each airshow site.

In August 2016, Fat Albert went to Tinker AFB in Oklahoma for a re-paint process and maintenance at Hill Air Force Base in Utah.

Fat Albert hasn't been a consistent part of the team's display for nearly two years. The Navy grounded its KC-130T fleet in July 2018 when KC-130T crashed in Mississippi killing 15 Marines.

Last year the US Navy was also considering purchasing a replacement C-130J aircraft from United Kingdom Ministry of Defense to serve as a new Fat Albert.