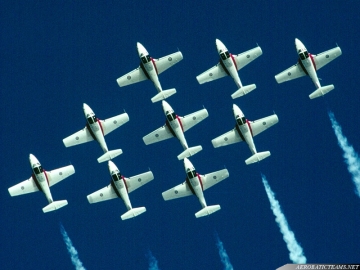 40 years ago in 1970, a new demonstration team was born at The Second Air Training School of the Canadian Air Force based in Moose Jaw, Saskatchewan. With the efforts of Captain O. B. Philip, who create unofficial aerobatic team of instructors, they begin to fly in their spare time using ex-Golden Centennaires Tutors aircraft. A year later this team received its name the Snowbirds.

The anniversary was marked with an airshow, Friday Oct 22 at Moose Jaw airbase with reunion of former squadron pilots even from the original first team.