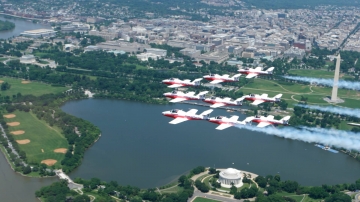 Royal Canadian Air Force demonstration squadron Snowbirds fly over the Washington, D.C., about noon on 24 May.

The Snowbirds flew in their standard nine aircraft formation, as the tenth aircraft fly around the main formation for video and photo purposes.

The Canadian demonstration team passed over the National Mall and then headed to Dulles International Airport trailing white smoke over the capital of USA. The fly over is meant "to highlight the relationship between Canada and the United States of America", said Canadian Air Force authorities.

Snowbirds are regularly on their USA tour, which began in May 2016.