Blue Angels honored a fallen pilot with a flyover 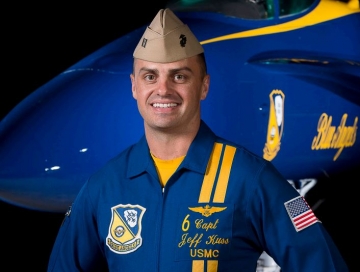 The US NAVY Blue Angels performed flypass over Pensacola on June 7th, to honor its fallen pilot #6 Capt. Jeff Kuss. The team is based at Forrest Sherman Field, Pensacola.

Blue Angels #5 Lead Solo Lt. Ryan Chamberlain led Fat Albert in a flyover of Palafox St. in downtown Pensacola, from North to South, then over Pensacola Beach, from East to West, and lastly, over Perdido Key, before landing at the base.

Fat Albert C-130, transported the body of Capt. Jeff Kuss, who died in crash on June 2, during practice flight at Smyrna.  The memorial ceremony slated to be held at the NAS Pensacola base chapel, June 9.