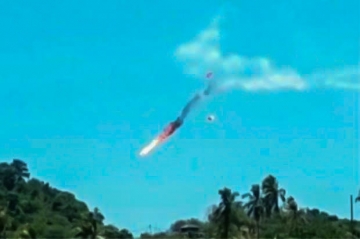 Two KT-1B Woong Bee aircraft from Indonesian Air Force's "Jupiter Aerobatic Team" collided today at 2pm during a rehearsal flight and crashed in to the ground at LIMA 2015 airshow.

All four occupants ejected safely and were taken to the hospital by Fire and Rescue Services Department crew. No one on the ground was injured.

The crash occurred during Langkawi International Maritime and Aerospace (LIMA 2015) exhibition in Malaysia were the "Jupiter Aerobatic Team" participated.