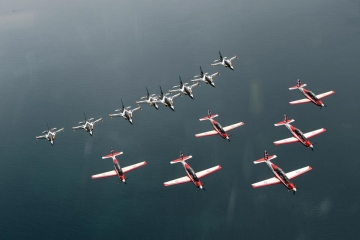 Both display teams were among participants at the LIMA 17 airshow and flew over the Malaysian skies and specially over the spectators of the airshow.

The third aerobatic team which flew at LIMA 17 air show was Russian Knight, who debuted with their new fighter aircraft Su-30SM, but only flying four planes.