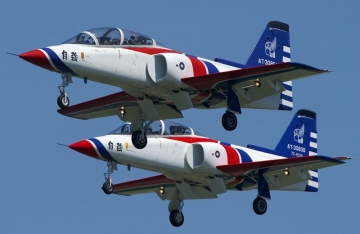 Two of the Taiwan Air Force aerobatic team “Thunder Tigers” AT-3 training jet aircraft, collided in mid-air during training flight. The planes took off from Gangshan Air Force Base at 3:37 p.m. for formation training and collided 33 minutes later at 16,000 feet altitude and a speed of 300 miles per hour.

The aircraft involved in the accident was No. 0816 and No. 0809 as the first one was on the lead, when the mishap occurred. The left horizontal tail of the leading plane ripped off after the collision, but the both pilots managed to return and land the AT-3 aircraft safely to Kangshan Air Force Base. The other AT-3 training jet crashed near a mountain in Pingtung County in Southern Taiwan, as the both pilots ejected safely and parachuted to the ground. These pilots are Lt. Col. Chang Kuo-chiang, who was at the back seat as instructor and 1st Lt. Tseng Kuo-wen who fly the plane as a rookie.

"The accident indicated to a pilot error, but the cause of the crash has to await the investigation of experts" said President of Taiwan Air Force Academy Ke Wen-an.