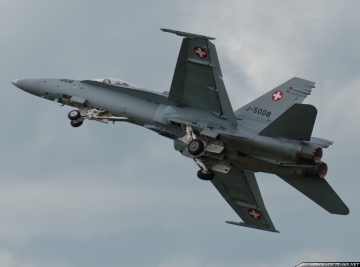 Two weeks ago, the Swiss Defense Minister announced that Patrouille Suisse aerobatic team could fly F/A-18 Hornet aircraft from 2016, when the present team plane F-5 Tiger will be retired.

However, this depends from the new order for 22 Gripen fighters, which will be determinate by referendum at the end of May.

If the Swiss Air Force equipped with Gripens, they will cover the air-policing role over the Switzerland. Therefore, the Patroille Suisse display team at airshow can use four or six Hornets.

The future of the team is still unsecure until the end of May while the order of Gripens will be confirm or not.