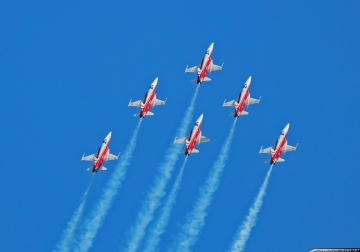 The vote on 18 May rejected a planned procurement of 22 Gripen fighter jets, under a program worth $3.5 billion. The Swiss Air Force planned to purchase the Gripen as a successor for the F-5E/F that has been in service since 1976. F-5 Tiger aircraft will be retired in 2016, so the new fighter deal was vital for Swiss Air Force.

Thus, the Patrouille Suisse future remains insecure, as earlier in April the Swiss Defense Minister announced that they could fly F/A-18 Hornet aircraft from 2016, when the present team's plane F-5 Tiger will be retired. However, this transition was depended from the order of 22 Gripen fighters.

There are still options to equip Patrouille Suisse display team with F/A-18 Hornet aircraft, but probably flying only with four planes. Other option is to equip the team with Pilatus aircraft, but Swiss Air Force already have such unit – PC-7 TEAM.