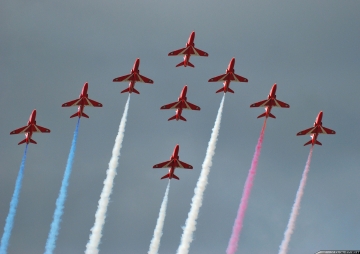 A group of anti-military activists and LGBTQI, protesting Pride In London over their decision to include a Red Arrows flyover.

The Royal Air Force aerobatic team is planned to take flyover the Pride In London.

This coalition declared that they were “shocked and outraged by the announcement that the Red Arrows would be flying over London Pride this year”. The group held a vigil outside City Hall on Tuesday 24 May to protest the Pride In London event, scheduled to take place on June 25, stating that “there is No Pride in War”.

However, these protesters don’t know that Red Arrows Hawk aircraft is not carrying weapons and the team NOT represent WAR. They just demonstrate flying abilities and pilots’ skills of Royal Air Force staff.