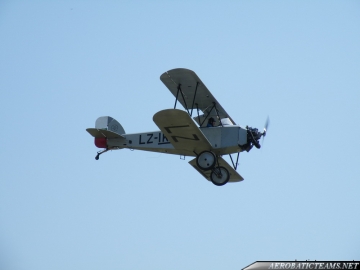 I arrived at Plovdiv Airport on May 22 about 11 o'clock - the practice day. Plovdiv city is the second largest in Bulgaria. The BIAF 2009 was held at civil airport of Plovdiv, Krumovo, and was planned for May 23, 24.

The all nine planes of Turkish Stars aerobatic team (seven one-seat NF-5A and two NF-5B two-seat jets) were at the front of the main gate. I spend three day there, but can't see the support C-160 of Turkish Stars, and the reason was that the plane bring the support crew and back to Turkey for participate in other support duties.

At the main gate, a duty officer can't grant me access to the planes, even that have an official permission from airshow organizer. At the barrier I met some of the Turkish Star's staff and asked them to get access to their planes to take photos and videos - they said that is not a problem. However it was a problem for duty officer, which still don't want to let me in. Nevertheless, I received a pass card from the airport civil security officer, and finally get closer to the Turkish Stars planes. One of the team's crewmen, a very well-meaning sergeant, which name I forgot, takes me to the planes.

First we had to wait a SU-25 taxing between Turkish Stars planes and us, for a practice flight. After that got to the planes and start taking photos. It's hardly to explain the feelings I feel getting so closer to the such elite squadron planes. This is the dream of any aerobatic team's fan. Was a very interesting to watch how Turkish Stars personnel preparing for the practice, very quietly - the same way like an airshow.

Also I get in to the cockpit of the one of the NF-5A's with wing-tip number 13, and another of my dreams became true. There was so wide cockpit giving a perfect comfort for the pilot. I learned that any of the planes can produce a red or white smoke using same pipe.

After an hour, the pilots arrived bringing by a van and after a small check around the planes, they getting in to the cockpits. In difference to many other aerobatic teams, the Turkish Stars pilots don't have an official ceremony to became and getting in to the planes. After short time they start engines and soon taxing for take off. One of the NF-5A stays as spare plane at the parking. I moved closer to the show center near by a small airport power station building in about 100 meters from the runaway.

The practice flight was almost above me, because was closer at the show center. This is the great opportunity, because I had a closer view of flying planes flying just above my head. This was possible only in practice flight days and just for peoples with special permissions, because of the safety reasons.

After the practice flight ends, the planes landed one after another and while the last plane of Turkish Stars landed, the airport fire trucks departed at high speed into the end of the runaway, where the planes were stops. It seems that something is going wrong. I really was surprised, when look to the maintenance team, which were so undisturbed like nothing's happened. When return to the parking area of Turkish Stars, one of the technicians told me that #7 blows its tire. Which tire I don't realize, because the planes were so far away, at the other side of the runaway. Other seven planes returned to the parking area without any damages. Pilots get down and brings together at the airport building to debrief and discuss the flight and the accident. Minutes later, a van brings the #7 pilot Lt. Harun "Dogan" Murat. After that I spend some time just to watch the debriefing, because they talked in Turkish language, which understandable for me. In about 15'00 o'clock I go back to my hotel to relax after hard sun burning.

At the second day of my visit, the first day opened for a public, I go at the other side of the airfield, where was the public spot. The show begins at 11'00 o'clock with demonstration of ejected pilot evacuation performed by Bulgarian Air Force helicopters Mi-17, Mi-24, Bell-206 and Cougar. Then follow the flights of vintage Bulgarian built DAR-1 plane, Bulgarian Air Force Su-25, MiG-21 and MiG-29.

About 12'10 o'clock the Turkish Stars NF-5's start taxing and in 12'30 they were ready for its first public performance at BIAF 2009 airshow. First three-ship formation begins the take off, but for a wondering of everyone the leader's plane don't take off and continue its movement to the runaway, while the other two planes lifted off . The malfunction case was an engine failure. Then the leadership of the team takes from the other NF-5B pilot, what is the unique case in the aerobatic teams. The fact that other pilot can takes the lead of some aerobatic team during the display was unknown for me and shows the great skills of the Turkish Stars pilots. So the team continues its demonstration in seven-ship formation.

At the next day everything was fine and the Turkish Stars performed its full eight plane airshow dazzling the crowd at the BIAF 2009 airshow. In fact the team is only one in the world performed with eight supersonic jets at the present.

The most spectacular maneuvers were performed by the both solo pilots. This was the turn performed in tight formation, while the lead solo was inverted upside down and the barrel roll in the same formation. These maneuvers don't displays even from the famous Thunderbirds or Blue Angels.