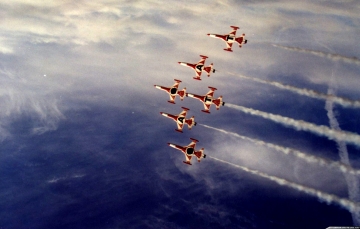 The “Turkish Stars” aerobatic display team was established on 7 November 1992 from the 132nd squadron of the 3rd Main Jet Base Command in Konya. On January 11, 1993, the team received its present name and their first demonstration was in 1994 at Diyarbekir.

Team's planes were painted in white and red, and originally the name and a bas-relief of the Turkish national hero Kemal Ataturk was painted on the bottom.

In the beginning, the team began flying with seven NF-5s, but later, in 2001, they became a unique eight-ship supersonic jet demonstration team. A few years later they back to seven-ship aircraft airshow.

The “Turkish Stars” had a C-130 Hercules support cargo plane, painted in team colors, which was eventually replaced by a C-160 Transall in 2008.

Capt. Ozer was on routine training flight over the team home base Konya when he crashed 2 kilometers away from the airbase.

From 2015 show season Turkish Stars first female pilot - Major Esra Ozata begin to fly in the back seat of #4 NF-5B.