USAF Thunderbirds to conduct a flyover at Hollywood 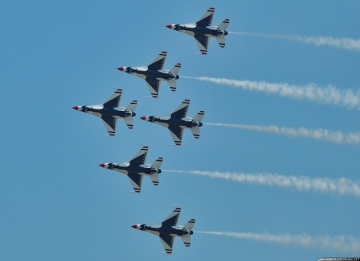 The Thunderbirds will fly over Hollywood in celebration of the upcoming premiere of “Captain Marvel” film during the afternoon of March 4, 2019.

Captain Marvel movie follows the story of Captain Carol Danvers, an Air Force fighter pilot who goes on to become the most powerful superhero in the Marvel Cinematic Universe.

The Thunderbirds have close ties to the film’s production. Last January, in preparation for the film, lead actress Brie Larson and director Anna Boden visited the team during an Air Force immersion and F-16 flight at Nellis Air Force Base, Nev.

During production, the team provided two Thunderbird pilots to advise cast and crew on fighter pilot traditions and culture. One of the advisors was Maj. Stephen “Cajun” Del Bagno, who passed away in a mishap during a routine Thunderbird training flight in Nevada only a week after consulting on-set.