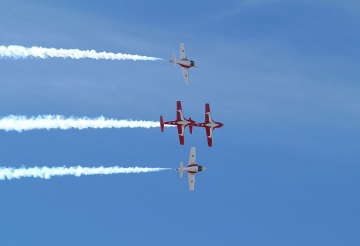 The incident happened during a May 6 performance at the air show in Fort Lauderdale, Florida during the “Double Take” maneuver when four planes fly in formation, two of them inverted. The tail of one inverted jet got caught in the turbulent engine exhaust of the jet ahead, causing control problems, recovering less than 100 meters above the ground. The Snowbirds, then interrupted air display due to safety reasons.

This was the first display for the 2017 airshow season. That incident is now the subject of a formal safety investigation and the team goes on training again. Until the training period ends, The Snowbirds will not perform at airshows.

They expect to return on air show schedule in June.