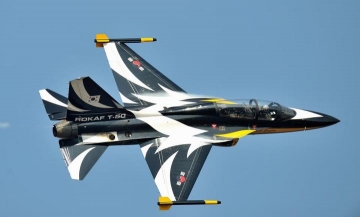 Captain Kim, Wan – Hee, a member of The Republic of Korea Air Force's aerobatic team Black Eagles died earlier today, when his T-50B jet aircraft crashed into the mountain in Hoengseong at about 10:28 a.m. Two of the team's planes took off at 10:23 a.m. together from Black Eagles' home air base Wonju. Five minutes later, the Captain Kim's aircraft falling down, smashed to the mountain, and burned in flames. Both planes were at training mission.

The investigators found a parachute near the crash site but the pilot apparently failed eject, as the pilot's body was at the cockpit.

The cause of the crash is not yet known.