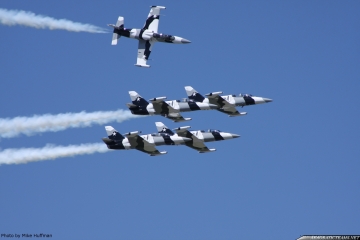 One of the L-39 aircraft belonging to Black Diamond Jet Team belly-landed yesterday after a VIP air display before the official Florida International Air Show at the Punta Gorda Airport. The pilot is unharmed, as the cause of the accident is not announced yet.

The team starts the 2012 show season two week earlier at TICO Warbird Air Show, Titusville, Florida, when they fly only with three L-39 and one T-33 aircraft.

The Black Diamond Jet Team announced that would fly from 2012 with five L-39 and two MiG-17 aircraft and to retired the T-33 during maintenance issues.