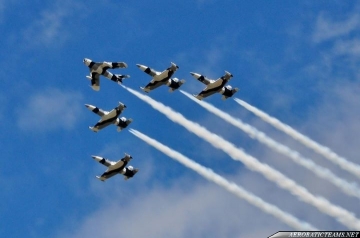 “Heavy Metal Jet Team” changed its name to “Black Diamonds Jet Team” and will add one more MiG-17 flying as opposing solo. Early this year they added another MiG-17 to their flight program as a lead solo. The team now flying with five L-39 and one MiG-17 as they used before one T-33, which was grounded after maintenance problems. So the “Black Diamonds Jet Team” will became a seven-ship civilian aerobatic team starting in that composition from 2012 show season. The pilots, ground crew and sponsor remains the same.

The team will complete the remaining two air shows for 2011 at Cocoa Beach Air Show and Stuart Air Show scheduled for November, both in Florida, but under the new team's name.

“Heavy Metal Jet Team” were formed at the end of 2010 at Lancaster, PA, USA. The team is sponsored by United Bank Card, Inc., as the all 2011 season is dedicated to the Make-A-Wish-Foundation.