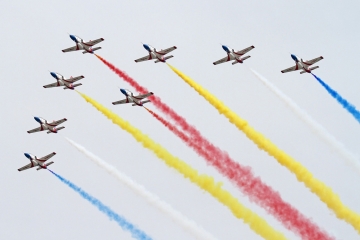 The People's Liberation Army Air Force announced on August 25, the formation of two aerobatic demonstration teams, which will make their debuts on 1st September at Changchun Air Show, Northeast China.

The Red Eagles team formed at No 3 Aviation College of the People's Liberation Army will fly eight Hongdu K-8 jet training airplanes. Both planes produced in China, which are equipped with smoke generators.

Both teams will complete the August First Air Demonstration Team at all air shows held in China and abroad. In difference with August 1st, where the pilots are regular fighters, in the new teams they will be first class flying instructors.