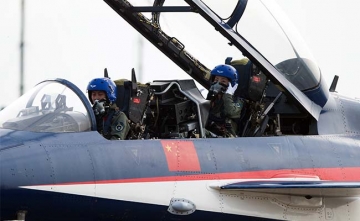 During the 10th China International Aviation & Aerospace Exhibition in Zhuhai , the PLAAF announced four female fighter jet pilots whom fly with the August 1st display team. In May 2005, China allowed women to be train as fighter pilots for the first time.

In fact, only two of them flew with the team, but in the back seat of J-10SY aircraft while their role is to recruit more females to join Air Force.

There were two more aerobatic teams at the Zhuhai Airshow – Russian Knights from Russian Air Force and Al Fursan from UAE Air Force.

The Korean aerobatic team Black Eagles cancelled their participation at the airshow under the pressure from USA. Black Eagles aircraft T-50 is joint project by Korea Aerospace Industries and Lokcheed Martin. US authorities worried of technology leakage, because the T-50 jets include core US technologies and so are subject to regulations regarding arms export and international arms trade.