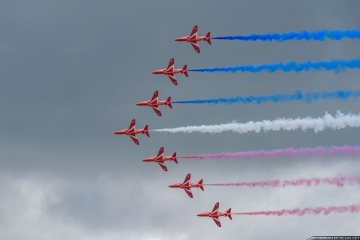 Royal Air Force announced that Red Arrows aerobatic team will fly with seven Hawk jets this air show season, because two members of the crew have moved to other positions in the air force.

The flight routine of the Red Arrows will remain the same as before when their normally flew nine aircraft.

Red Arrows flew in seven-ship formation before in 2012 show season.

“This year, the RAF Red Arrows will display with a seven-aircraft formation, rather than nine, as two of our formation pilots have moved to other roles within the RAF. Performing as a seven-aircraft display is something the Red Arrows often prepare for and have carried out several times in the past when a situation dictates, such as illness or aircraft availability. For national flypast events, it is intended that the team will consist of all nine aircraft, with experienced Red Arrows pilots completing the formation.