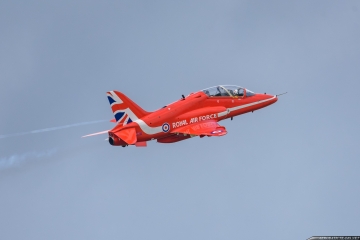 The UK Ministry of Defence plans to retire its entire fleet of 76 Hawk T1 trainer aircraft. This leaves only 28 Hawk aircraft in British service, the T2 variant.

The Hawk T1 is the current Red Arrows aircraft, but for now their aircraft remains operational.

In fact, the team has a long history impact over the recent decades in the aviation fans not only in UK, but abroad. Red Arrows are team unit who inspire the next-generation of pilots and are a great source of national pride, so losing such incredible team will be loss for all UK just to spend £15m a year.

“The Royal Air Force will retire equipment that has increasingly limited utility in the digital and future operating environment. This will include rationalising older fleets to improve efficiency, retiring Typhoon Tranche 1 by 2025, and Hawk T1. We will enhance the new military flying training system with further investment in synthetic training that will deliver more capable pilots more quickly and more efficiently.”