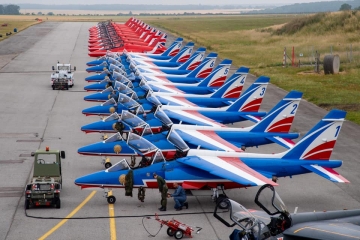 On the 18 June 1940, General de Gaulle spoke to the French people for the first time to ask them to join him in continuing the war. He spoke from London on BBC radio and this single, almost accidental, event is now considered one of the most fundamental acts in French political history.

The flyover is a start of 2020 display season for Patrouille de France, but it is still unknown when the airshow displays will be perform again.

Patrouille de France flew in nine ship formation, which is uncommon to the French team.