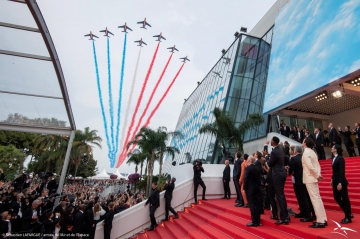 The team performed a flyover the theatre entrance of Cannes Film Festival on May 18, when the actors of the “Top Gun: Maverik” where on the red carpet.

A day before Tom Cruise was able met the team at Nice airport and sit at the cockpit of one of team’s Alpha Jet aircraft.