Snowbirds plane crashed into house during take off at Kamloops 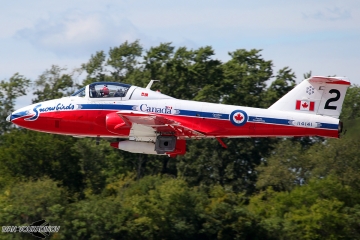 One of the Snowbirds CT-114 Tutor aircraft crashed into house in an area near Glenview Avenue, while taking off from Kamloops BC today (May 17) at about 11:30 a.m.

The plane was part of two planes took off from Kamloops Airport,  bound to Comox, when it goes suddenly up and after losing speed, the plane stall, then starts falling in spiral to the ground. Seems to be a pitch control issue.

The pilot managed to eject before the plane crashed and landed on the roof of a house on nearby Schreiner Street. The two residents of the home escaped without injury. There is no reports anyone else on the ground was hurt. Update May 18 - Snowbirds announced that Captain Jenn Casey lost her life in the crash.

The Snowbirds aerobatics team scheduled to perform a fly over the Okanagan Lake area on May 17, as part of Operation Inspiration - a salute to Canadians and front-line workers during the COVID-19 pandemic.

The Snowbirds jets had arrived in Kamloops on Saturday May 16, after flyovers in Alberta.

On Sunday morning, the Snowbirds tweeted some mountain passes had low cloud cover, which would be unsafe to fly through.

In an Instagram story post on Saturday, a #7 Snowbirds pilot Joel Wilson said the team was in Kamloops and was dealing with some "electrical malfunctions."

The last team’s crash was in the U.S. state of Georgia last October, where the team was scheduled to perform an airshow. Capt. Kevin Domon-Grenier sustained minor injuries when he ejected from the plane, which crashed into a farmer's field. No one else was hurt.

The crash video from another angle:

#FlightSafety #2020Jinx continues with the crash of a #CFSnowbirds ✈️ this morning about 1130 PST. A video - Shannon Forrest - reveals a flight of 2 aircraft take off from #YKA when the port ✈️ pitches up sharply, banks left & spirals into a ????‼️Pilot ejected ????Injuries uncertain https://t.co/25ZmhHSMd2 pic.twitter.com/0hnzXsm9JX