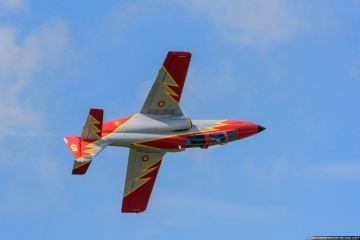 This afternoon about 15:45 local time a Patrulla Aguila’s #5 aircraft crashed in the waters of the Mediterranean Sea, near La Manga del Mar Menor (Murcia), killing the pilot Commander Eduardo Fermín Garvalena. The CASA C-101 Aviojet aircraft smashed onto the water during a practice flight. All seven aircraft of Patrulla Aguila aerobatic team were on training flight when the crash occurs.

Commander Eduardo Fermín Garvalena, 38 years old, born in Granada, was in his second season with the team. He had an experience of more than 2,000 flight hours in different squadrons of the Spanish Air Force, among them in Wing 14 flying Eurofighter.

The cause of the crash is under investigation and no further details were provide at this point.

The C-101 models, which first flight was in 1977, are in the final phase of their useful life and will be replaced by the Pilatus PC-21 training aircraft scheduled to arrive for the end of the year with the intention to be used as training aircraft in September of 2021.

At now it is not clear how the crash will impact to Patrulla Aguila upcoming air show season.