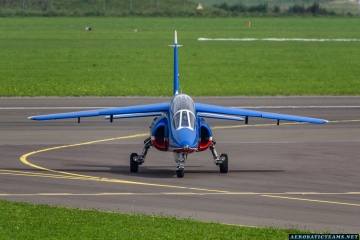 Number 2 aircraft of the French Air Force aerobatic team Patrouille de France skidded off the runway at Perpignan-Rivesaltes airport today, during landing after a rehearsal for upcoming airshow at Saint-Cyprien.

Athos 2, which is the nickname of the pilot who fly number 2 position within the team, Captain Jean-Philippe Tanguy ejected safely, but was hospitalized with average injuries.