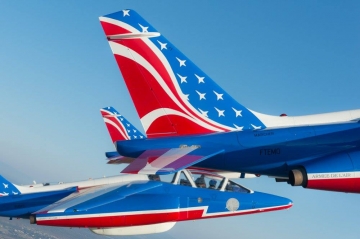 At the beginning of 2017, The French Air Force aerobatic team Patrouille de France aircraft received new tailfin livery.
The new painting of Alphajets is dedicated to The US tour expected from March to May. The reason for the US airshow tour is to commemorate the 100 years anniversary of USA entry into World War I.

For now, only three confirmed locations were known, only from airshow organizers, not by Patrouille de France. The full US tour schedule to be complete soon. These locations are: