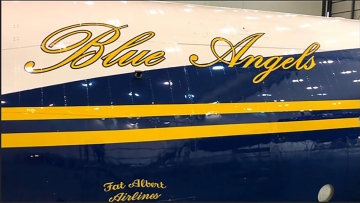 The C-130J Super Hercules aircraft purchased back in 2019 from Royal Air Force to serve as a new Fat Albert is going under conversion configuration at Marshall Aerospace and Defence Group in United Kingdom.

The new aircraft to be painted in slightly different color scheme from older one.

This Blue Angels cargo aircraft will join the squadron around May 2020, but still the exact date is to be confirmed.

The video of a newly painted Fat Albert has just been released on Blue Angels Facebook page: