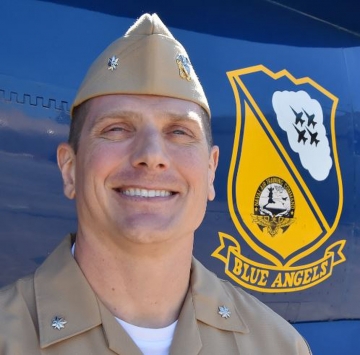 Cmdr. Brian Kesselring was announced as the Commanding Officer and Flight Leader for 2020-2021 Airshow Seasons and will replace Capt. Eric Doyle who is the present Boss of Blue Angels.

Kesselring, a native of Fargo, North Dakota, joins the Blue Angels after serving as the commanding officer of Strike Fighter Squadron 81. His previous assignments include four squadron tours, where he flew the F/A-18 Hornet and deployed in support of Operation Iraqi Freedom, Operation New Dawn, Operation Enduring Freedom and Operation Inherent Resolve.

“It’s absolutely humbling and I’m honored to be here to represent the Navy and Marine Corps team," said Kesselring. “Throughout my career as an F/A-18 pilot, I’ve always looked to the Blues as a source of inspiration.”

Kesselring will report for initial training in Pensacola, Florida in September and officially take command of the squadron at the end of the air show season in November. The change-of-command ceremony is slated for November 10, 2019 at the National Naval Aviation Museum.