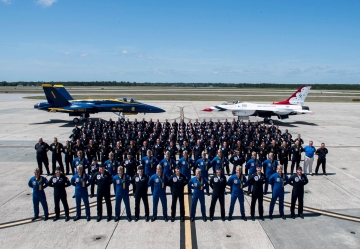 After many years The US Air Force Thunderbirds and US NAVY Blue Angels joined again together for a few days reunion.

On Monday 24 April, whole Thunderbirds squadron arrived at Blue Angels home base at Pensacola Naval Station for a joint exercises including a pilot exchange, where pilots ride along in the opposite team's jet to see how they operate.

Both US aerobatic teams performed pilot exchange exercises almost every year, but the whole teams reunion is a very rare.

Under Department of Defense guidelines, the two teams are not allowed to perform at the same airshows because the military wants to cover as much recruiting territory as possible by using both teams in different locations throughout the year.

The most spectacular event was the joint delta formation flight over the Pensacola beach on Wednesday, a very rare and unique formation.

During the flyover an incident occurred, when two of the Blue Angels Hornets collided slightly swapping the paint of the aircraft.