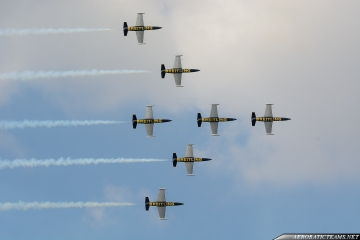 For now just two air show sites are announced AirVenture in Oshkosh and National Championship Air Races in Reno, Nevada, but obviously more demonstrations will be confirmed in US and probably in other countries in America.

In 2013, Breitling Jet Team have made Far East tour performing in Philippines, Indonesia, Singapore, Malaysia, Thailand and Japan. So, the task to transport the aircraft of the team at thousands of miles will not be uncommon to the crew.

The team is based at Dijon, France and flies seven L-39C Albatross planes painted in monochrome black and gray, all equipped with white smoke generators.