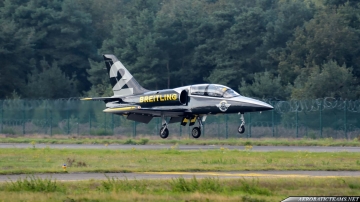 Number 2 of the Breitling Jet Team's L-39s crashed on September 15, near city of near Valkenswaard, Netherlands.

The team just finished its display during Heldair Show Maritiem at Den Helder Airport and departure to Kleine Brogel base, Belgium, on the way to Sanicole Airshow, when the L-39 received engine problems.

Both occupants, pilot and engineer ejected safely, while the plane crashed to the ground about 19:30. The team forced to interrupt the remaining air displays for the year and return to its home base at Dijon, France.