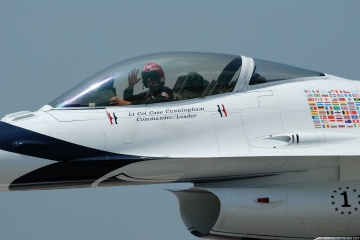 USAF Thunderbirds will be joined by six new officers for the next 2012 demonstration season. Three of them will become demo pilots including the leader.

Maj. Greg Moseley will became the new leader and commander of the United States Air Force Air Demonstration Squadron, "Thunderbirds" for the 2012 air show season. Moseley will replace Lt. Col. Case Cunningham, who is in his last season as the squadron's leader.

Maj. Caroline Jensen will replace Maj. John Gallemore as the right wing #3 position. Major Jensen will become the third Thunderbirds' female demonstration pilot an will fly at the same positions as the first one, Major Nicole Malachowski, who joined the team in 2006.

The Thunderbirds are now at the European tour.