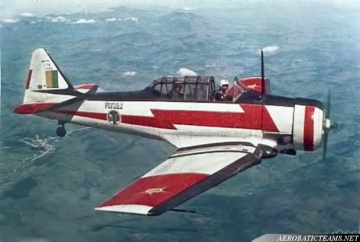 The history of the aerobatic team of the Brazilian Air Force (Forca Aerea Brasiliera - FAB), began in 1952 when four instructors from the Air Academy established an "unofficial" aerobatic team with four North American T-6 Texan training airplanes. The team's first demonstration was on May 14, 1952, at the Campo dos Alfonsos air base (near Rio de Janeiro) where the Air Academy located. Initially, the team flew with three aircraft but soon increased to four. During this time the "Esquadrilha da Fumaca" did not have an official statute and because of this the team pilots had to train for displays during their time off. The team also at first had no "official" name. Very soon as a joke they receive the unofficial name "Esquadrilha da Fumaca" (or Smoke Squadron) because of the presence of smoke generators on their aircraft which were used during the performance to generate white smoke during the maneuvers.

In 1954, the Minister of the Aviation provided a gift to the team of five T-6 aircraft. This was the first official recognition for the team and it quickly received the statute of an official aerobatic team of the Brazilian Air Force. The following year, a new color scheme was chosen for the aircraft - white, red and blue. Later that same year, two solo pilots were added to the team. Their aim was to capture the public's attention while the main formation re-grouped for their next maneuver.

The team flew with T-6 Texans until 1968 when they were replaced with new French-made Fouga Magister jet trainers (or T-24s in Brazilian nomenclature). These new aircraft were painted in the colors of the Brazilian flag - green, yellow, blue with white as an accent color. The new aircraft however proved to be very difficult to maintain because of the hot Brazilian climate. The petrol crisis at the end of 1970s also forced the team to reconsider their options. Consequently, after only 46 demonstrations with Fouga Magister, the team returned to its old mount, the venerable T-6. Then in 1977, because of financial issues, the team was ordered to disband.

On February 25, 2002, the aircraft in the squadron were given a brand new color scheme in the colors of the Brazilian flag - green, yellow and blue.

On 18th May 2002, the team set a new World Record by flying a formation of 11 aircraft inverted for 30 seconds.

On April 2, 2010, one of the team's pilots, Capitan Anderson Amaro Fernandes who flying the #2 position, sadly was killed in a crash after performing a solo maneuver during an airshow at Lages, Santa Catarina, Brazil. The accident occurred after 20 minutes of demonstration, when No. 2 was performing two rolls following a previous downward maneuver. Unfortunately, he didn't recover in time and smashed into the ground beside the runaway. The other six aircraft landed safely and no one else was injured. ( See crash video and other video).

At the end of 2012, Esquadrilha da Fumaca transited to new aircraft A-29 Super Tucano.

On 12 August 2013, the team lost two pilots during a crash. The incident occurred at 9:30am during training flight when the A-29 Super Tucano aircraft went down. Both pilots Captain John Silva Igor Pivovar and Captain Fabricio Carvalho ejected but too low for effective parachute opening. Silva and Carvalho flew the same position in the Esquadrilha da Fumaca.