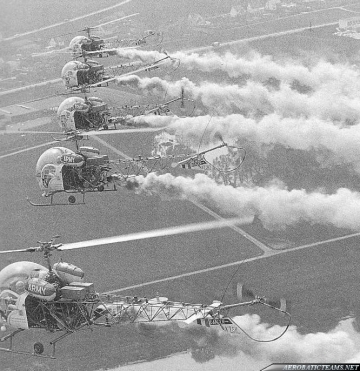 The "Blue Eagles" helicopter aerobatic display team of the British Army Aviation Corps was first formed in the spring of 1968 by five instructors from the Army Aviation School at the base in Middle Wallop. Employing five Bell-47G3B1 Sioux helicopters drawn from the School, the instructors performed demonstrations in their free time during the summer. Their participation in the Farnborough airshow in that same year drew significant attention. Based on the success of their first season, the team received official status. The "Blue Eagles" then took part in various aviation displays in locations such as Iceland, Scotland and Germany until 1974.

However, by this point the Army Corps could not continue to support a standing aerobatic team. Fortunately, a group of enthusiasts from the school in Middle Wallop volunteered to continue with an aerobatic team on a volunteer basis and they practiced in their free time. They changed names several times becoming in succession the "Eagles", "Army Eagles", "Sparrow - Hawks", and "Silver Eagles". They flew in formation with different Army helicopters like the Sioux, Gazelle, Lynx and Scout, and they sometimes flew in formation with other historical fixed-wing aircraft and vintage helicopters.

In 1982 it was the Silver Jubilee of British Army Air Corps. A display team was set up consisting of 6 x Lynx AH Mk1 plus one solo Lynx AH Mk I (total of 7 aircraft). The pilots were all instructors from Lynx Conversion Flight at Middle Wallop and display flying in addition to their standard instructional duties. Occasionally the seventh solo display aircraft was an AAC DH Beaver or G-LYNX from Westlands, but usually a Lynx AH Mk1. The team was called 'the Silver Eagles' (because of the Silver Jubilee) and performed throughout the 1982 season at airshows which included: Middle Wallop, RAF Odiham, RNAS Yeovilton, RAF Finningley Air Day and overhead Southampton and Portsmouth on the return of QE II and HMS Hermes from the Falklands.

The Silver Eagles was only formed for that one Jubilee Year of 1982. Seven Lynx was a unique team and there was no intention to continue after that year. It would anyway have been too expensive on resources.

In 1992, now called the "Eagles", the team had planned to fly four Lynx helicopters but the Army Air Corps perspective was that the Lynx was too vital to other operations. They consequently made the decision to refurnish the team with one Lynx and four Westland / Aerospatiale Gazelle helicopters. This new team also gained the name "Silver Eagles".

In 1992, now called the "Eagles", the team had planned to fly four Lynx helicopters but the Army Air Corps perspective was that the Lynx was too vital to other operations. They consequently made the decision to refurnish the team with one Lynx and four Westland / Aerospatiale Gazelle helicopters. This new team became the "Silver Eagles".

In the 2001 season, in a precedent setting appointment, a woman was posted to the team as an aerobatic pilot.

The "Blue Eagles" have suspended displays since the 2010 season for financial and operational reasons. Where practicable, they have continued to support events with simple role demonstrations and/or static displays. The intention is to hopefully re-establish the "Blue Eagles" at some point on the display circuit with a new reinvigorated display.

Thanks to Robert Wilsey - Leader of the 1982 Silver Eagles