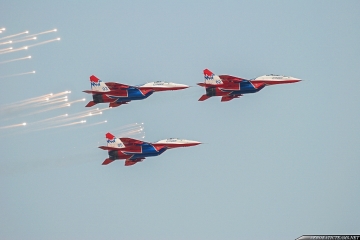 The 100 years of Serbian military aviation air show was held on September 2nd, 2012 at Batajnica airfield near Belgrade, Serbia. The 1st September was plan as media day and rehearsals, starting at 11am. Unfortunately for the media representatives, airshow organizers decide to allow the public, which came to the airfield and the show begins more before 11am. The only public day was announced Sept 2nd.

The road to the Batajnica was awful due to the heavy traffic, which surprised me, as expect there should be no public. Last 9 kilometers to the airfield completed for a 90 minutes. Boring, is it.

Anyway, I received my press pass and entered the airfield. After 15 minutes of walking, I reached the public spot, as just my arriving matched with the Swifts rolling for take off. I was lucky to come on time for the Swifts display, as this was my primary target – to watch and shoot the famous Russian Air Force aerobatic team.

The team flies only three MiG-29s, one of them a MiG-29UB. Normally the team flies four aircraft, but the Swifts commander Valery Morozov was discharge on 30 August by The Russian Minister of Defense. This was the reason why the Swifts flew with three fighters only.

The photography conditions were not good due to dusty and haze air.

Due to the heaviest traffic that I expect for the second airshow day, I decided to miss it and get back to my country Bulgaria, which is near to the Serbia. After 9 hours of nonstop driving, I reached my city.