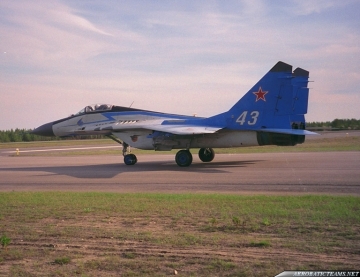 In 1986 six of the new Soviet fighters MiG-29 visited Finland to took a part in an airshow. This event leaded the beginning of creation of the Strizhi (Swifts).

In 1990 six pilots started to training formation flying with MiG-29. Later the planes receives white-blue color scheme. On May 6, 1991 they performed its first display with new painted MiG-29s and received its present name Strizhi. This display was closed for the public. This date become team's birthday.

Later in May Swifts made its foreign debut, performed at airshow in Uppsala, Sweden and again this event was closed for public.

The first public airshow was in May 1992, when Strizhi took part during 50th Anniversary of Normandy-Neman squadron in Rheims, France.

In September that year for the first time US NAVY Blue Angels visited Russia, performing awesome flight demonstration at Kubinka airbase. From Russian side only Strizhi (Swifts) flew on that show.

In 1999 the team was disbanded, because most of the team pilots retired. Also in Kubinka airbase started major upgrade.

On Nov 23, 2000 the team begins to fly again, but with new pilots, with just four planes and in new airbase - Andrianople. The debut of the new team was at Pushkino airbase near St. Petersburg in 2001. Later they performed at MAKS'01.

In 2002 Strizhi and Russian Knights started to fly in jointly formation of four planes of each team to fly-passed over Red Square parade.

In the beginning of 2003 all team's planes received new paint scheme from MiG's manufacturer. The new paint was red, white and blue swift figure painted at the bottom and upper surface of the fuselage.

On June 12, 2003 (Russian Independence Day), they fly again over the Red Square together with Russian Knights, but this time with six MiG-29s and four Su-27s from Russian Knights side.

On 27 July 2003, one of the team's two-seater MiG-29UB crashed right after take off from Perm's airport, Russia. Strizhi landed there for refueling. Runaway was wet, pilot loosed control and plane goes out into the grass. Both pilots ejected successfully.