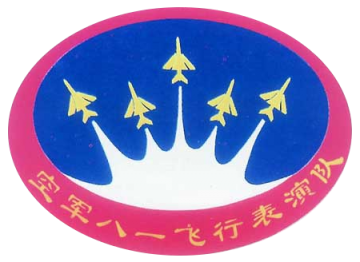 The aerobatic team of the People's Liberation Army Air Force (PLAAF) of China was established on February 12, 1962. In the beginning it contains 9 JJ-5 airplanes (which is Chinese combination of Soviet two-seat MiG-15UTI and MiG-17. The airplanes were equipped with smoke generators which released white, red and blue (later also yellow and orange) colored smoke. In fact each airplane releases smoke with different color. The machines are colored red and white.

Later the team moved to Chengdu F-7EB - the Chinese version of MiG-21F. In 1997 the team was named August 1st (PLAAF founding day). Since then it flies on 6 airplanes Chengdu F-7EB while having 5 more in reserve. The team's first demonstration under that name was on December 20, 1997 in Tianjin (team's base). The planes were colored red and white. In the front all of them carried red-painted numbers from 01 to 11. The planes were equipped with smoke generators which release white and red colored smoke.

On June, 1997 three pilots were killed in an accident during a training flight. The mishap happens in Tianjin base while performing loop in a row. Three of the team's aircraft collide.

On September 15, 1998 one of the team's fighters crashed during practice at Chongming Island Airport, near Zhuhai.

In 2001 the team receives the statute of 81st aerobatic team and begins to fly Chengdu F-7GB in white and light-blue color scheme. Planes were equipped with white, blue and red smoke generators.

In July 14 2009, the #3 aircraft crashed while training to National Day airshow.

At the end of 2009 August 1st aerobatic team, begins its transition to newer Chinese built multirole fighter Chengdu J-10. Aircraft were painted in white, blue and red colors. The debut of the team with these airplanes must be at Zhuhai Air Show in November 2010.

The present team home base is Yangcun Air Force Base (Meichong) near Tianjin.