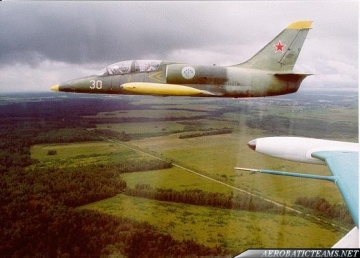 The "RUSS" aerobatic team was firs formed in 1987 at the Vjazma Air Training Centre to participate in the Tushino Air Show. At first, the pilots practiced with L-29 aircraft, but the type's high stabilizer causing particular difficulty for the L-29 in the slot and this deficiency ultimatelyforced the team to transition to the L-39. The Vjazma Air Training Centre therefore received 10 new L-39 Albatross aircraft and the team began training under the leadership of Farid Akchurin. The team was soon ready and, in August 1987, it performed with nine camouflaged L-39s at the Tushino air parade. At the time, the "RUSS" display team performed only horizontal formation maneuvers.

At the end of 1987, Colonel Yuri Bikov became the commander of the Vjazma Air Training Centre and also the leader of the team. Under his leadership, the team added vertical formation maneuvers to its program.

Unfortunately, on June 7 1991, Colonel Yuri Bikov died in an accident during a routine flight in a L-39. A year later, on June 26, another RUSS pilot, Vladimir Arkhipov, died in crash while the team was performing a new formation maneuver.

In 1992, Russian Government shutdown all 27 Air Training Centers in Russia, except for Vjazma which was renamed to the Vjazma Air Club. Reductions also forced the team to move to only six aircraft. Despite the fact that the team flew for the next three years, the precise future of the "RUSS" aerobatic team remained uncertain, until 1995, when the team became an official unit of Russian Air Force and increased to seven L-39 aircraft. The key role in keeping the team alive during these tenuous times belonged to the Air Club Chief, Kazimir Tihanovich.

In 1997, the team performed abroad for the first time at the CIAF'97 air show in Hradec Kralove, Czech Republic. Later, in 1997, the "RUSS" team also performed displays in Belarus and, in 1998, in Latvia.

In 1998, all of the team's aircraft received special revised blue and white color scheme.

On June 10, 2001, two of the team's aircraft collided during a three-ship formation take- off at the air show in Levashovo, Saint Petersburg. Both #5 and #7 aircraft crashed, and although both pilots ejected, the #7 pilot did not survive. The cause of the crash was a combination of strong wind and pilot error.

In 2011, the team participated in the MAKS air show with a five-ship formation team.

Starting in 2012, the "RUSS" aerobatic team will become a civil team with an all-new paint scheme. The Vjazma Aviation Training Center, where the team is based, will also convert its inventory to civil registration, which will allow more flexibility to fly outside of Russia.