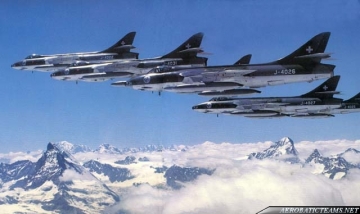 The first formation flights in Swiss Air Force dates from beginning of 1959, when in Surveillance Wing was established an aerobatic team, flying with four Hawker Hunter Mk58. On June 2, 1959 this team made its first public appearance in Biel, but the display included only fly-pasts in different formations. The first real demonstration was in 1963 during Oskar Bider's day in Bern.

In 1960 the Swiss Air Force celebrating 50th anniversary. In this occasion was created a display team that must take part in the celebrating trough the country. This team made great impression on the public and the press starts to call the team Patrouille Suisse, inspired from French aerobatic team Patrouille de France. Federal Defense Department decided to give the team permanent statute. So the Surveillance Wing took the task to choose six pilots and to prepare the new team for demonstrations. The pilots were chosen from 1st and 11th squadrons, training as a part of their personal duties.

In 1968 was made an attempt to equip the team with Mirage IIIS, but the planes proved hard to fly in close formation.

Until the 1978, Patrouille Suisse displayed only in Switzerland, because of country neutrality. Then the team took a part during Patrouille de France 25th anniversary celebration in Salon de Provence. In that year, 1978 to the team was added a sixth plane.

In 1991 the team's planes received new paint scheme, the middle bottom surface of the Hawker Hunters was painted in red and white and the logo of 700th anniversary of Switzerland.

In 1993 during Fairford airshow, Patrouille Suisse gets great luck, escaping from disaster, when one of the two Russian MiG-29's crashed near by the taxing Patrouille Suisse planes. After 8 minutes from the crash the team,s Hunters took-off for the air demonstration.

On Sept 25, 1994 in Nancy, France, Patrouille Suisse made its final demonstration using Hunter's.

In 1995 Patrouille Suisse started to fly with F-5E Tiger in the new white and red paint scheme, which used to the present. First show with these planes was in June.

On the next year, the logo of the team flew to space, with Swiss astronaut Claude Nicollier, who was former team member, on board of Space Shuttle Colombia. Also in 1996, the team planes were equipped with white smoke generators.

In 1998 the team flew over Paris during Football World Cup final. Later that year #4 pilot died in crash, flying with F/A-18 Hornet. For that reason Patrouille Suisse used gray painted #4 plane untill the end of the season.

In 1999, Patrouille Suisse does not take displays, because of War in Yugoslavia.