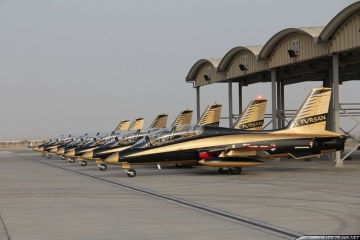 The team was formed at the beginning of 2010 and the team's first public appearance was on January 20, 2010 with a simple fly-by at the graduation ceremony for pilots and air-traffic control students at the Khalifa Bin Zayed Air College. Four more MB-339s in camouflage paint schemes also flew past using red smoke.