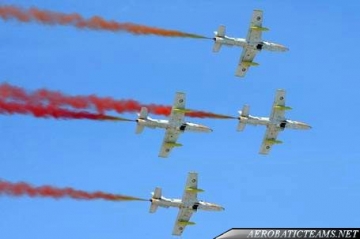 All ten aircraft will be ungraded to be used from the new aerobatic display teams of the UAE Air Force. In fact is not confirmed that all ten airplanes will be applied to this display team.

The Aermacchi manufacturer will remove the wing tip tanks, will change the fuel system and will be installed the smoke generators in the four UAE national flag colors: white, red, green and black. The UAE aircraft will be upgraded like the Frecce Tricolori MB-339s. Within a few days Alenia Aermacchi will completing the work over the last four aircraft, including the painting in elegant black and gold livery.

The team is called unofficially "Knights", but its not confirmed from the United Arab Emirates Air Force that this is the name of the team.

Team's first public appearance was on Jan 20, 2010 with a fly-by at the graduation ceremony for pilots and air-traffic control students at the Khalifa Bin Zayed Air College. Then four MB-339 in camouflage paint scheme fly-passed using red smokes.