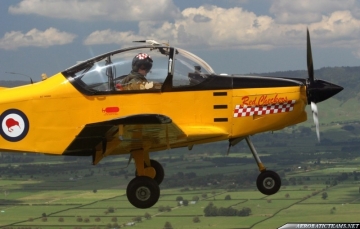 The official statement about the last year fatal crash of the RNZAF aerobatic team "Red Checkers" said the pilot performed non-regulated maneuver that he had not been trained to do. Squadron Leader Cree had been performing a "Fishtail Pass" maneuver at the time of a crash - a move where the plane flies in front of the crowd waving the tail left and right like a fish.

Fatigue Data Recorder recovered months after the crash and showed that the pilot had lost control of the plane while the tail was to the right, but had persisted in again pushing the tail to the left. He pushes again to an aerobatic move even he lost control seconds before. A New Zealand Air Force Court of Inquiry has found Squadron Leader Nick Cree continued with the "fishtail pass" maneuver even though he had already lost control once making the plane uncontrollable.

The report indicated that Cree had an unsafe habit to perform this maneuver, sliding the CT-4 Airtrainer aircraft too hard and dangerously. Previous times he was able to recovered, when he loses control, but on the morning of January 14, 2010, Squadron Leader Cree was at low altitude and there was no time and space to recover, when his plane goes suddenly to the ground. He was flying at only about 178 feet and 65 knots when he lost control for the second and fatal time.

"Squadron Leader Cree was flying the Fishtail Pass in an unstable and inconsistent manner due to a lack of specific training in how to fly the maneuver."

"Squadron Leader Cree had not discussed the maneuver with any other pilot, nor had he advised of the fact that he was regularly departing from controlled flight during the Fishtail Pass", the report said.