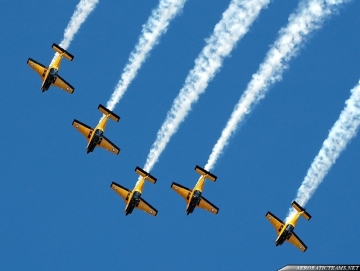 Royal New Zealand Air Force aerobatic display team Red Checkers is ready for a new airshow season, after they were grounded for all 2010.

The new display season for the team will starts in January 2011. Last season beginning was unfortunate during two incidents, one fatal.

On Jan 14, 2010 Squadron Leader Nicholas Haydn Cree, 32, was killed during training flight. The crash occurred about 8 a.m. near the Santoft Forest, 18km west of Bulls, while all six Red Checker's CT-4 Trainer aircraft practicing aerobatic maneuvers. He was performing a non-risked solo maneuver and no indication for any troubles with the plane. Last year on April 11, one of the team's planes involved in bird strike at Classic Fighters Airshow at Marlborough, but without major consequences. Maybe Nick Cree also hit a bird/s causing the crash.

On March 1 2010, another incident occurred, when two of the team's aircraft touch each other in training flight. Both planes land safely with minor injuries, but these accidents raised the question - is the Red Checkers are safely to display in front of public, because this was the second incident within a few months.

After these incidents RNZAF authorities decided to ground Red Checkers for inspections of the team's training program. Now at the end of 2010, after hard training the Red Checkers are finally set up as they promised in March.