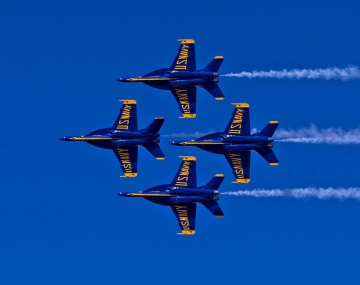 On May 27, one of the Blue Angels F/A-18E Super Hornet jets hit a bird during a flight rehearsal for Naval Academy Commissioning Week at Annapolis.

The Super Hornet, which hit a cormorant, landed safely with minor damage.

“The aircraft damage was repaired by the squadron’s maintainers and did not impact flight operations or the performance yesterday,” said squadron Public Affairs Officer Lt. Chelsea Dietlin.

The incident was the first ever with the brand new Blue Angels aircraft – Super Hornets.

The Blue Angels are scheduled to flyover Navy-Marine Corps Stadium at 10:04 a.m. Friday May 28, for the Naval Academy graduation.