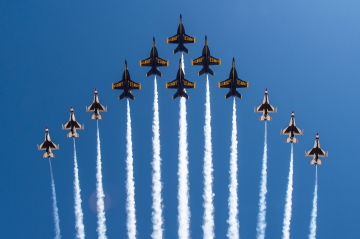 For the first time ever, the Thunderbirds and U.S. Navy Blue Angels debut a flight formation known as the “Super Delta” during a joint training evolution on March 2, over the Imperial Valley.

After the 2020 very successful joint flyovers during “Operation America Strong”, both US Demonstration Squadrons will continue this incredible joint formation flying in 2021 at National Memorial Day Parade: America Stands Tall in Washington, D.C.

The formation grew out of a series of joint training opportunities held in 2020 and 2021, and serves as a symbol of the teamwork, discipline, and skill of the men and women of our United States military forces deployed around the globe.

We are humbled to have the opportunity to virtually debut a full flight this Memorial Day weekend during the nation-wide broadcast of the National Memorial Day Parade: America Stands Tall, hosted by the American Veterans Center in Washington, D.C., honoring those who have served and sacrificed before us.

Tune-in to your ABC, NBC, CBS and Fox affiliate May 29 -31, to view the debut of this formation flight with re-airings in the weeks to follow.

Because of uncertain airshow season following the COVID-19 pandemic situation, I predict that this flyover will not be just one.