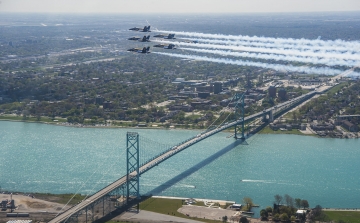 A video posted online shows illegally captured drone footage of Blue Angels as they performed an “America Strong” flyover in Detroit on May 12.

The Blue Angels did not published any official statement regarding the video.

The video is still available online via different accounts, but I will not publish this stupid video and give it publicity. I will not encourage other dumb people to do the same stupid and very dangerous videos.