Thunderbirds had an incident during Los Angeles flyover on May 15 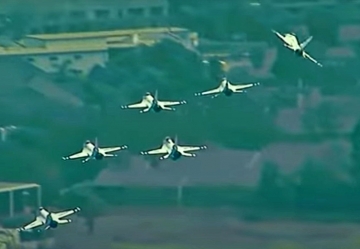 The USAF Thunderbirds had a mid-air incident during flyover at Los Angeles on May 15, when #6 Opposing Solo pilot Capt. Kyle Oliver left the delta formation after an unexpected maneuver from the team’s leader, Thunderbird #1 Lt. Col. John Caldwell.

The incident was record on video, shot from a helicopter from Bloomberg, when the team flying south towards Newport Beach.

Lt. Col. John Caldwell starts a left turn when he suddenly level the aircraft quickly to the right, #3 Right Wing, sliding a little bit to #6 as a result he left the formation to the right-up to avoid a potential collision. The rest of the six-ship delta formation also loses its shape. After few more seconds, Thunderbirds return to its tight delta shape. In addition, after few more seconds they start a left turn.

Probably the Thunderbird #1 start left turn too earlier and then he correct the straight flying, but too quickly and probably without notice the entire formation.