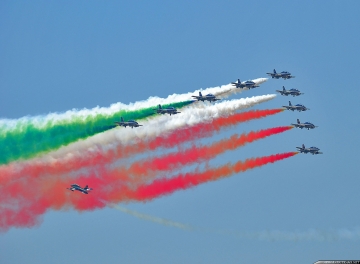 More than a month ago, in the middle of March, the US President Donald Trump tweeted a video of Italian Air Force Frecce Tricolori display stated that Italian Air Force played Pavarotti singing Nessun Dorma as they put on an incredible air display to lift the spirits of their nation during the coronavirus lockdown.

Frecce Tricolori used colored smoke to paint the Italian flag in the skies while the Pavarotti singing Nessun Dorma.

The video was shared by the Aeronautica Militare (Italian Air Force) who said: “Unity and teamwork have always been the principles on which our Armed Force is based and, at this moment more than ever, are fundamental.”

Footage of the event has gone viral on social media, with even Donald Trump sharing the video, declaring “The United States love Italy.”

The video was posted worldwide with false information saying the Italian Air Force did that this week to boost the morale of those quarantined from the Coronavirus.

In fact, the video was from an airshow during Frecce Tricolori 2019 season. The flyover maneuver under the song Nessun Dorma played by Pavarotti is a regular part of the team's air display and performed at the end of the display.

A month later Donald Trump announced Operation America Strong where both US Demonstration teams will perform a series of flyovers at many US cities to support the healthcare workers raising their spirit during Covid-19 pandemic.

With no doubt the video of Italian Air Force Frece Tricolori inspired the idea that US Demonstration teams Blue Angels and Thunderbirds can do the same painting the colors of national flag into the skies and that way raising the spirit of healthcare workers and US citizens at all.